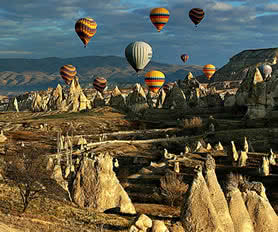 Nevsehir, which is home to the world-famous Cappadocia region, is now one of Turkey’s most visited places. When Nevsehir is called, Cappadocia, Urgup, Goreme, and fairy chimneys come to mind.
Nevsehir history and architecture affect everyone who makes a tour of Nevsehir. So What do you need to know about Nevsehir? The word meaning of Nevşehir means ‘New City,’ and this region is like a door to the world with its unique features.
Looking at the history of Nevşehir, Hittites and Christians lived in the region immediately after them. In Nevşehir, which is an important center of Christianity, houses are carved on and inside rocks. Nevşehir’s churches were made by carving and processing stones. For this reason, the churches here were fundamental in the past in terms of being a place of retreat and refuge. Nevsehir region, today called Cappadocia, covers a larger area than the city.

Located in the center of Central Anatolia, where is Nevsehir.

Because of Nevsehir’s climate, millions of people participate in Nevsehir tours, mostly held in spring and summer, but seeing Nevsehir in the winter period also provides a separate beauty.

What is Nevsehir famous for?

Anyone who loves history and architecture will not be able to get enough of shopping in Nevşehir. Let’s tell those who are wondering what to buy from Nevşehir right now. Nevşehir is famous for its ceramics, rugs, wine, cream, pumpkin seeds, pottery, and handmade rag dolls. You can choose gifts produced from dishes and ceramics.

Information about Nevsehir, the Pearl of Central Anatolia with its numerous regions included in the Unesco World Heritage list, is not limited to this. Nevsehir tours are important places that you should not return without seeing. Here are the attractions in

The area of Nevşehir is 5.467 km2. It is located in a large region formed by volcanoes that were very ancient in central Anatolia. While touring Nevşehir, which Kızılırmak divides into east and west, you will see the river crossing through the city. 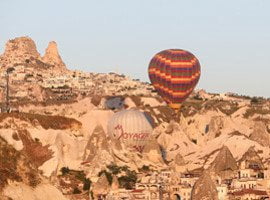 How To Get Nevsehir?

If you say how to get to Nevsehir, which is in the first place among the popular tourist attractions in Turkey, let’s note that you can easily reach here from almost anywhere. Istanbul Nevsehir is the easiest, comfortable and short distance by plane. Apart from Nevsehir Cappadocia Airport, Kayseri Airport is also among the evaluated alternatives for transportation to Nevsehir.
It is 280 km by bus from Ankara to Nevsehir. If they come from Istanbul to Nevsehir, they can easily access it since the route is via Ankara. One of the easiest and most fun ways to go to Nevsehir by bus will be to come to Nevsehir with grupal Cappadocia tours.

Nevsehir cuisine hosts many menus and flavors that will leave their mark on palates. In addition to the restaurants in Uçhisar, Urgup, and Goreme, you can also taste local dishes in the restaurants located in the center of Nevsehir. In particular, testi kebab is the most famous dish of Nevşehir.

The taste of Testi kebab, which is presented on a soil dish, is delicious.

Hair pans, appetizers, pot kebab, meat wrap in Tile, acid dessert are the ones you should try among Nevsehir dishes. Its wine is also world-famous.

Entertainment in Nevsehir and Cappadocia, famous for its local nights, Turkish nights, means entertainment with Reed oral instruments. Many hotels organize their own entertainment night, while you can also find bars and clubs in places such as Goreme, Urgup, and Avanos. Entertainment is also organized in wine houses in Nevşehir. Cafes with live music and concerts are also available.

Festivals in Nevsehir also constitute Nevsehir entertainment. Held annually, the Cappadox Festival hosts thousands of people. Urgup Vintage Festival is also one of the festivals with various entertainment and drinks.

Open chat
Luxury Tour Turkey .com
You're Welcome 👋
Please feel free to contact us for further information that you may need.